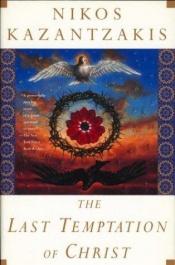 The Last Temptation of Christ

The Last Temptation of Christ is a historical novel written by Nikos Kazantzakis, first published in 1953. It was first published in English in 1960. It follows the life of Jesus Christ from Jesus's own perspective. The novel has been the subject of a great deal of controversy due to its subject matter, and appears regularly on lists of banned books.
The central thesis of the book is that Jesus, while free from sin, was still subject to fear, doubt, depression, reluctance, and lust. Kazantzakis argues in the novel's preface that by facing and conquering all of man's weaknesses, Jesus struggled to do God's will without ever giving into the temptations of the flesh. The novel advances the argument that, had Jesus succumbed to any such temptation, especially the opportunity to save himself from the cross, his life would have held no more significance than that of any other philosopher.

The Mysterious Flame of Queen Loana

Gentlemen of the Road