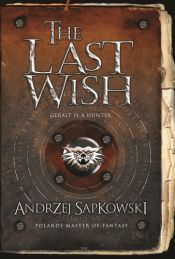 The Last Wish is the first of the two collections of short stories preceding the main Witcher Saga, written by Polish fantasy writer Andrzej Sapkowski. The first Polish edition was published in 1993, the first English edition in 2007. The book has also been translated into several other languages.
The collection employs the frame story framework and contains 7 main short stories; Geralt of Rivia, after having been injured in battle, rests in a temple. During that time he has flashbacks to recent events in his life, each of which forms a story of its own.