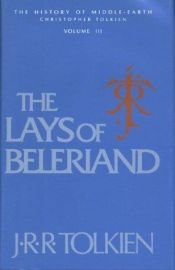 The Lays of Beleriand

The Lays of Beleriand, published in 1985, is the third volume of Christopher Tolkien's 12-volume book series, The History of Middle-earth, in which he analyzes the unpublished manuscripts of his father J. R. R. Tolkien.
The book contains the long "lays" or poems Tolkien wrote: these are The Lay of the Children of Húrin about the saga of Túrin Turambar, and The Lay of Leithian about Beren and Lúthien. Although Tolkien abandoned them before their respective ends, they are both long enough to occupy many stanzas, each of which can last for over ten pages. The first poem is in alliterative verse, and the second is in rhyming couplets. Both exist in two versions.
In addition to these two poems, the book also gives three short, soon-abandoned alliterative poems, which are The Flight of the Noldoli from Valinor, The Lay of Eärendel, and The Lay of the Fall of Gondolin.
The first versions of the long lays fit chronologically in with Tolkien's earliest writings, as recounted in The Book of Lost Tales, but the later version of The Lay of Leithian is contemporary with the writing of The Lord of the Rings.

The Treason of Isengard

The war of the jewels : the later Silmarillion, par …

The Power that Preserves