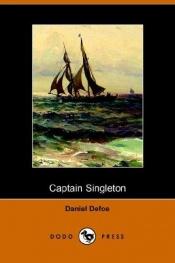 The Life, Adventures and Piracies of the Famous Captain Singleton

The Life, Adventures and Piracies of the Famous Captain Singleton is a novel by Daniel Defoe. It is believed to have been partly inspired by the exploits of English pirate Henry Every.
The narrative describes the life of an Englishman, stolen from a well-to-do family as a child and raised by Gypsies who eventually makes his way to sea.
One half of the book concerns Singleton's crossing of Africa and the later half concerns his life as a pirate in the Indian Ocean and Arabian Sea. Defoe's description of piracy focuses for the most part on matters of economics and logistics, making it an intriguing if not particularly gripping read. Singleton's pirate behaves more like a merchant adventurer, perhaps Defoe's comment on the mercantilism of his day.

The Survivors of the Chancellor

The Lighthouse at the End of the World

Eight Hundred Leagues on the Amazon