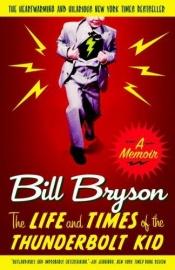 The Life and Times of the Thunderbolt Kid is a 2006 memoir by best-selling travel writer Bill Bryson. The book delves into Bryson's past, telling of his youth growing up in Des Moines, Iowa, during the 1950s and early 1960s. It also reveals the backstory between himself and Stephen Katz, who appeared in A Walk in the Woods and "Neither Here Nor There: Travels in Europe." Bryson also describes and comments on American life in the 1950s. The title of the book comes from an imaginary alter-ego Bryson invented for himself in his childhood, who has the ability to "vaporise people."
The book was released on September 1, 2006, in the United Kingdom, where it was published by Doubleday. In the United States and Canada, the book was launched on October 17, 2006, and was published by Broadway Books and Doubleday Canada respectively.