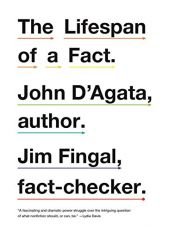 The Lifespan of a Fact

An innovative essayist and his fact-checker do battle about the use of truth and the definition of nonfiction.

How negotiable is a fact in nonfiction? In 2003, an essay by John D’Agata was rejected by the magazine that commissioned it due to factual inaccuracies. That essay―which eventually became the foundation of D’Agata’s critically acclaimed About a Mountain―was accepted by another magazine, The Believer, but not before they handed it to their own fact-checker, Jim Fingal. What resulted from that assignment was seven years of arguments, negotiations, and revisions as D’Agata and Fingal struggled to navigate the boundaries of literary nonfiction.

This book reproduces D’Agata’s essay, along with D’Agata and Fingal’s extensive correspondence. What emerges is a brilliant and eye-opening meditation on the relationship between “truth” and “accuracy” and a penetrating conversation about whether it is appropriate for a writer to substitute one for the other.

Thinking Like Your Editor: How to Write Great Serio …

The forest for the trees

What if Writing Exercises for Fiction Writers

A Writer's Book of Days : A Spirited Companion and …

How I Write: Secrets of a Bestselling Author (2006)

The Weekend Novelist - A Dynamic 52-week Program To …