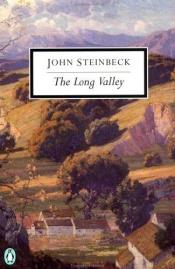 The Long Valley is a collection of short stories written by the American author John Steinbeck. The collection was first published in 1938. It comprises 12 short stories.
The short stories were written over several years and are set in Steinbeck's birthplace, the Salinas Valley in California. They include the prize-winning tale The Murder; The Chrysanthemums, the representation of lynch mob violence in the The Vigilante; and the classic Red Pony tales. Many of the stories were published previously. The "Red Pony" was written in 1933 and published in Reader's Digest.

The Complete Short Stories of Ernest Hemingway: The …

Grey Area (Self, Will)

The Quantity Theory of Insanity