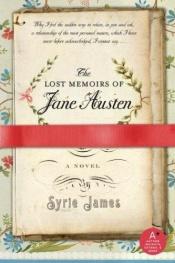 The Lost Memoirs of Jane Austen

Many rumors abound about a mysterious gentleman said to be the love of Jane's life—finally, the truth may have been found. . . .

What if, hidden in an old attic chest, Jane Austen's memoirs were discovered after hundreds of years? What if those pages revealed the untold story of a life-changing love affair? That's the premise behind this spellbinding novel, which delves into the secrets of Jane Austen's life, giving us untold insights into her mind and heart.

Jane Austen has given up her writing when, on a fateful trip to Lyme, she meets the well-read and charming Mr. Ashford, a man who is her equal in intellect and temperament. Inspired by the people and places around her, and encouraged by his faith in her, Jane begins revising Sense and Sensibility, a book she began years earlier, hoping to be published at last.

Deft and witty, written in a style that echoes Austen's own, this unforgettable novel offers a delightfully possible scenario for the inspiration behind this beloved author's romantic tales. It's a remarkable book, irresistible to anyone who loves Jane Austen—and to anyone who loves a great story.