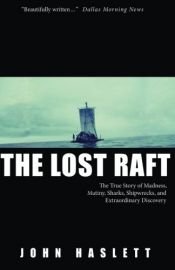 "You won't be able to put it down." National Geographic Adventure
Modern-day explorers leave the world behind in this compelling portrayal of life aboard a raft at sea.
Beautifully written … Dalas Morning News
The Raft Author John Haslett travels to the birthplace of an ancient culture to build a 30,000-pound raft made of balsa wood and bamboo. His goal is to sail the vessel to Hawaii. Over the next five years, however, Haslett and his crews struggle through a steamy, tropical odyssey. Along the way, the strain reveals itself in a cast of characters who range from the patently heroic, to an Ahab-like crewman who teeters on the brink of insanity. At its heart, the book is a frank, revealing look inside a modern-day expedition. “Our entire relationship with Earth and Reality had been reduced to two ideas, the raft and the sea.” Ecuador, Colombia, Panama, and Costa Rica As the story progresses, the rafts and their crews are driven by the elements into remote coves and beaches throughout South and Central America, where they live like castaways for weeks at a time. In these sections, the author offers a more conventional travelogue, describing life in forgotten places, the existence of improbable cultures, and the hardships of being marooned in the tropics. “We could see from the deck that we were entering into a world of the most beautiful shade of green. Healthy trees rose up and exploded in verdant splendor. Flat and angular leaves glittered with rainwater.” Life aboard a balsa raft The author spends 125 days on the open sea, and in those chapters he describes his encounters with whales, porpoises, sea turtles, sea snakes, sharks, storms, and great periods of calm. Other passages in the book are dedicated to describing practical living in a small bamboo hut on the sea, cooking, cohabitation, and, at times, surviving. Ultimately, the isolation of the raft teaches Haslett the hard lessons of leadership, and human frailty. A lost culture in South America The book gives a short history of the ancient mariners of Ecuador, the Manteño, and then goes on to show how the author and his colleagues deciphered the methods and secrets of this lost culture. The Manteño were the coastal traders who sailed the giant balsa rafts, equipped with “ropes and sails as fine as anything in Spain.” Within just a few years of the Spaniard’s arrival in South America, most of the voyaging Manteño had succumbed to European disease. They left behind no written language. Kon-Tiki In 1947, six men sailed a balsa wood raft from South America to Polynesia, a distance of 4800 miles. Their raft was the famed Kon-Tiki, and their voyage set off a variety of other raft voyages that the author discusses in relation to his story. His story, however, bears almost no resemblance to the voyage of the Kon-Tiki. Haslett’s perspective is of reconciling the misinformation left by a dying icon, the raft’s captain, Thor Heyerdahl. Knowledge of the Kon-Tiki, or other previous raft adventures is definitely not a prerequisite.

Lonely Planet: Journeys: A Short Walk in the Hindu …

A death in Brazil