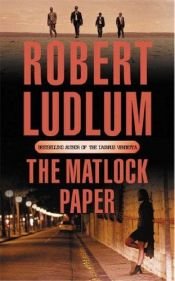 The Matlock Paper is the third suspense novel by Robert Ludlum, in which a solitary protagonist comes face to face with a massive criminal conspiracy.
Its protagonist, James Barbour Matlock, is an English professor in his 30s who is recruited by the Department of Justice to investigate a drug smuggling ring, led by a mysterious figure named "Nimrod." The novel is set at the fictitious Carlyle University in Connecticut, a thinly disguised Wesleyan University in Middletown, Ludlum's alma mater.