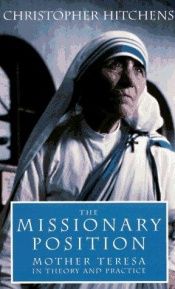 The Missionary Position: Mother Teresa in Theory and Practice is an essay by the British-American journalist and polemicist Christopher Hitchens published in 1995.
It is a critique of the work and philosophy of Mother Teresa, the founder of an international Roman Catholic religious congregation, and it challenges the mainstream media's assessment of her charitable efforts. In length more a pamphlet than a book, it was re-issued in paperback and ebook form with a foreword by Thomas Mallon in 2012.
The book's thesis, as summarized by one critic, was that "Mother Teresa is less interested in helping the poor than in using them as an indefatigable source of wretchedness on which to fuel the expansion of her fundamentalist Roman Catholic beliefs." The response to Hitchens' arguments fell largely upon ideological lines, with some critics contesting his evidence and others his understanding of the religious phenomenon Mother Teresa represented.

Through the narrow gate

The Long Loneliness: The Autobiography of Dorothy D …

Something beautiful for God

Life of the Beloved