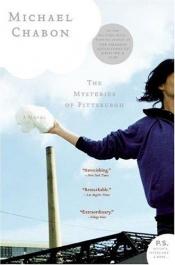 The Mysteries of Pittsburgh is a novel by American author Michael Chabon. The story is a coming-of-age tale set during the early 1980s in Pittsburgh, Pennsylvania.
It was Chabon's first novel, which he began writing as a 21-year-old undergraduate at the University of Pittsburgh. He continued to work on it during his studies in the Creative Writing Program of the Department of English at the University of California, Irvine, where he submitted it as his thesis for the Master of Fine Arts degree. One of his advisors, the novelist MacDonald Harris, sent it to his literary agent. It was published in 1988 and became a bestseller.
A film adaptation—starring Jon Foster, Sienna Miller, Peter Sarsgaard, and Nick Nolte—was released in 2009.