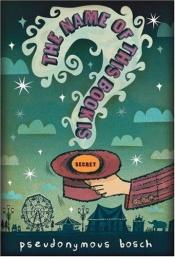 The Name of this Book is Secret

The Name of this Book is Secret is a 2007 fantasy novel for young readers by Pseudonymous Bosch. It chronicles the adventures of two children, Cass and Max-Ernest, as they investigate the mysterious death of local magician Pietro Bergamo. Frequently during the course of the book Pseudonymous chastises himself for writing the secret, going so far as to change his mind and stop halfway through, only to bribe himself into completing the story with chocolate.
A sequel was published in late 2008, under the name If You're Reading This, It's Too Late. A third book was released on September 1, 2009, with the title This Book Is Not Good for You. A fourth book, This Isn't What It Looks Like, was released on August 21, 2010. A fifth book was released on September 20, 2011 and is titled You Have to Stop This.

Gregor and the Prophecy of Bane

The Maze of Bones

The House with a Clock in Its Walls

Harold and the Purple Crayon

The sisters Grimm, book one