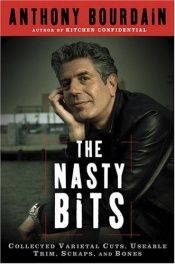 The Nasty Bits: Collected Varietal Cuts, Usable Trim, Scraps, and Bones, is a largely nonfiction New York Times bestselling book by Anthony Bourdain, published in 2006. The book is a collection of 37 exotic, provocative, and humorous anecdotes and essays, many of them centered around food, followed by a 30-page fiction piece. The book concludes with an appendix of commentaries on the various pieces, including when and why they were written.
The essays range from descriptions of restaurant-kitchen life; to various rants about places, people, and things Bourdain objects to; to lively accounts of far-flung world travels and remote ethnic life and food; to accolades of the unsung Latinos who cook most fine-dining restaurant food in America; to glowing reports of cutting-edge chefs like Ferran Adrià; to details of Bourdain's obsessions and pursuits when he is not working; to opinions and anecdotes on various other subjects.
Bourdain has organized the various essays and anecdotes into sections named for each of the five traditional flavors:
Salty
Sweet
Sour
Bitter
Umami

It Must've Been Something I Ate: the Return of the …

The Way To Cook

The Taste of Place: A Cultural Journey into Terroir …