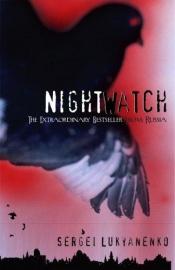 Night Watch is a fantasy novel by Russian writer Sergei Lukyanenko published in 1998. The story revolves around a confrontation between two opposing supernatural groups: the Night Watch, an organization dedicated to policing the actions of the Dark Others—and the Day Watch, which polices the actions of the Light Others.
The novel is first in a pentalogy that continues with Day Watch, Twilight Watch, Final Watch, and New Watch. The first story of the novel, Destiny, was made into a successful Russian film, Night Watch, which, although keeping the characters and many of the events of the original novel, alters some significant elements of the story.