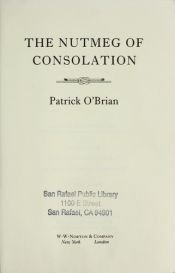 The Nutmeg of Consolation is the fourteenth historical novel in the Aubrey-Maturin series by British author Patrick O'Brian, first published in 1991. The story is set during the Napoleonic Wars and the War of 1812.
Building a schooner on an island in the South China Sea as food supplies grow scant, Aubrey and his shipmates are attacked by pirates then rescued by a Chinese ship large enough to hold them all as far as Batavia, where Raffles has a ship for them.

Blue at the Mizzen