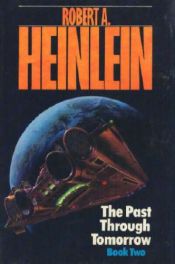 The Past Through Tomorrow

Science Fiction by Robert A. Heinlein

The Past Through Tomorrow is a collection of Robert A. Heinlein's Future History stories.
Most of the stories are part of a larger storyline of a rapidly collapsing American sanity, followed by a theocratic dictatorship. A revolution overthrows the theocracy and establishes a free society which, nonetheless, does not save the pseudo-immortal Lazarus Long and his Howard Families from fleeing Earth for their lives. Most editions of the collection include a timeline showing the chronology of the stories, time of birth and death of the significant characters, and commentary by Heinlein.
The specific short stories included vary with the edition, but typically include:
"Life-Line", 1939; a month before "Misfit"
"Misfit", 1939
"The Roads Must Roll", 1940
"Requiem", 1940
"'If This Goes On—'", 1940
"Coventry", 1940
"Blowups Happen", 1940
"Universe", 1941
"Methuselah's Children", 1941; extended and published as a novel, 1958
"Logic of Empire", 1941
"'—We Also Walk Dogs'", 1941
"Space Jockey", 1947
"'It's Great to Be Back!'", 1947
"The Green Hills of Earth", 1947
"Ordeal in Space", 1948

The Green Hills of Earth

The Moon Is a Harsh Mistress