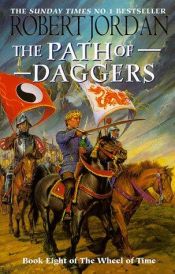 The Path of Daggers is the eighth book of The Wheel of Time fantasy series written by American author Robert Jordan. It was published by Tor Books and released on October 20, 1998. Upon its release, it immediately rose to the #1 position on the New York Times hardcover fiction bestseller list, making it the first Wheel of Time book to reach the #1 position on that list. It remained on the list for the next two months. This book is the shortest book in the main Wheel of Time series, consisting of a prologue and 31 chapters.
The title of the book is a reference to a Seanchan saying: "On the heights, all paths are paved with daggers."

Guardians of the West