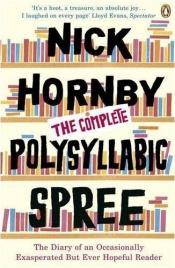 The Polysyllabic Spree is a 2004 collection of Nick Hornby's "Stuff I've Been Reading" columns in The Believer. The book collates his columns from September 2003 to November 2004, inclusive. It also includes excerpts from such authors as Anton Chekhov and Charles Dickens.
In it, Hornby lists the books he bought each month, and the books he actually read. For instance, he might buy Dickens, but read J.D. Salinger. He then writes a column revolving around what he read, bought, and what he intends/intended to read.
The title is a reference to the choral symphonic-rock group The Polyphonic Spree. In the book, Hornby describes the people who run The Believer as being "all dressed in white robes and smiling maniacally, sort of like a literary equivalent of the Polyphonic Spree."
There are three follow-up books, Housekeeping vs. The Dirt, Shakespeare Wrote for Money and More Baths Less Talking.

Once Upon a Quinceanera