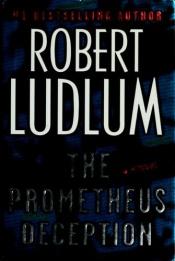 The Prometheus Deception is a spy fiction thriller novel written in 2000 by Robert Ludlum about an agent in an ultraclandestine agency known only as the Directorate named Nick Bryson, alias Jonas Barett, alias Jonathan Coleridge, alias The Technician, who is thrown into a fight between an organization he knows as Prometheus and his former employers at the Directorate.
Like other Ludlum novels, The Prometheus Deception conveys Ludlum's concern about the accumulation of power by individuals or organizations. Whereas some of his prior novels, such as The Holcroft Covenant and The Aquitaine Progression featured conspiracies by governments or political extremists to seize control of the world, The Prometheus Deception features a conspiracy by a very large company. Though it details the reaction of governments to a series of major terrorist attacks, The Prometheus Deception was written before the events of September 11, 2001. Readers have noted a striking similarity between the novel's plot and the synopsis of the TV show "Alias," in which a secret agent working for what she believes is the CIA discovers she's been working for a terrorist organization all along.