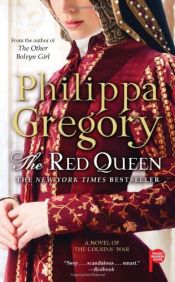 The Red Queen: A Novel of The Cousins' War

The second book in The Cousins’ War series by #1 New York Times bestselling author Philippa Gregory brings to life the story of a complex and determined woman who shapes the course of history—now available in mass market.

Fans and reviewers everywhere agree that no one writes historical fiction better than Philippa Gregory. In The Red Queen, Gregory illuminates the fascinating woman who founded England’s most powerful ruling line, the Tudors: Margaret Beaufort.

Ignored by the king, mocked by her mother, and forced into a loveless marriage, Margaret, heiress to the red rose of Lancaster, is determined to turn her lonely life into a triumph. Convinced that her piety and lineage have destined her for greatness, she is determined that her son Henry will rule England—no matter what the cost. After the death of her first husband, she sends the boy into exile and promises him in marriage to the daughter of her enemy, Elizabeth of York. As the political tides constantly turn, Margaret charts her course through another loveless marriage, treacherous alliances, and secret plots. Following the death of her second husband, she marries the ruthless Thomas, Lord Stanley, and gambles her life and her son’s future on his support as she masterminds a final rebellion that will either put her son on the throne or send them all to their deaths.