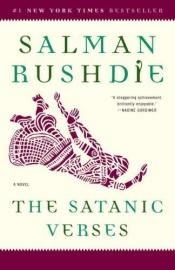 One of the most controversial and acclaimed novels ever written, The Satanic Verses is Salman Rushdie’s best-known and most galvanizing book. Set in a modern world filled with both mayhem and miracles, the story begins with a bang: the terrorist bombing of a London-bound jet in midflight. Two Indian actors of opposing sensibilities fall to earth, transformed into living symbols of what is angelic and evil. This is just the initial act in a magnificent odyssey that seamlessly merges the actual with the imagined. A book whose importance is eclipsed only by its quality, The Satanic Verses is a key work of our times.

It is very hard to follow if you are not familiar with Hindu culture and if the translator was to lazy to look stuff up (like in Serbian) it is even worse. e.g. The translator would need to know who a gopi was in order to know that gopis was plural; if you were was to understand the character who "hung her hat shameless on a Chola Natraj", and other characters' perception of her, you would need to know Chola Natraj was a depiction of Vishnu made during Chola dynasty... I had to stop reading every time and look these things up (and I have nonstop internet, in 1988 people did not) - it feels like research for a college paper. There would be 5 references, one after another, in as many sentences.

The Passion of New Eve