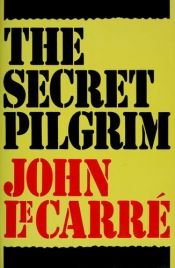 The Secret Pilgrim is a 1990 novel, set within the frame narrative of a series of lectures by John le Carré's George Smiley, famous only within the 'Circus'. The memoirs, narrated by Ned, a former pupil of Smiley's, are, except for the last, triggered by tangential Smiley comments in lectures given at Sarratt, the spy-training college which Ned runs. However, they are primarily accounts of Ned's own experiences rather than of Smiley's. Ned, who does not give his surname, represents himself as the head of the Russia House in The Russia House, disgraced by the defection of Barley Blair and hence condemned to a semi-retirement in charge of Sarratt. The Secret Pilgrim is effectively a collection of short stories, tied together as Ned's recollection. Many of them are recognisable anecdotes or urban legends within the British Intelligence community.
Within the first few pages the novel reveals the ending of The Russia House and the identity of the mole in Tinker Tailor Soldier Spy.

The Tailor of Panama