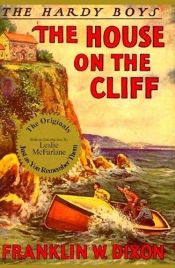 The Secret of the Old Mill (The Hardy Boys Mysteries #3)

The Secret of the Old Mill is Volume 3 in the original The Hardy Boys Mystery Stories published by Grosset & Dunlap. The book ranks 86th on Publishers Weekly's All-Time Bestselling Children's Book List for the United States, with 1,467,645 copies sold by 2001. This book is one of the "Original 10", generally considered to be the best examples of the Hardy Boys, and Stratemeyer Syndicate, writing.
This book was written for the Stratemeyer Syndicate by Leslie McFarlane in 1927. Between 1959 and 1973 the first 38 volumes of this series were systematically revised as part of a project directed by Harriet Adams, Edward Stratemeyer's daughter. The original version of this book was rewritten in 1962 by Alistair Hunter resulting in two different stories with the same title.

Hardy Boys The House on the Cliff (, Book 2)

The Secret of the Caves