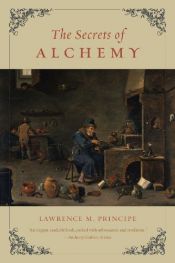 The Secrets of Alchemy

In The Secrets of Alchemy, Lawrence M. Principe, one of the world’s leading authorities on the subject, brings alchemy out of the shadows and restores it to its important place in human history and culture. By surveying what alchemy was and how it began, developed, and overlapped with a range of ideas and pursuits, Principe illuminates the practice. He vividly depicts the place of alchemy during its heyday in early modern Europe, and then explores how alchemy has fit into wider views of the cosmos and humanity, touching on its enduring place in literature, fine art, theater, and religion as well as its recent acceptance as a serious subject of study for historians of science. In addition, he introduces the reader to some of the most fascinating alchemists, such as Zosimos and Basil Valentine, whose lives dot alchemy’s long reign from the third century and to the present day. Through his exploration of alchemists and their times, Principe pieces together closely guarded clues from obscure and fragmented texts to reveal alchemy’s secrets, and—most exciting for budding alchemists—uses them to recreate many of the most famous recipes in his lab, including those for the “glass of antimony” and “philosophers’ tree.” This unique approach brings the reader closer to the actual work of alchemy than any other book.

The Elements of Murder: A History of Poison

The Perfect Scent: A Year Inside the Perfume Indust …

Waking Up: A Guide to Spirituality Without Religion