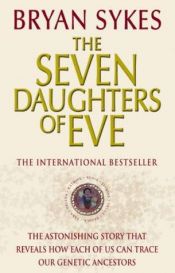 The Seven Daughters of Eve: The Science That Reveals Our Genetic Ancestry

The Seven Daughters of Eve is a book by Bryan Sykes that presents the theory of human mitochondrial genetics to a general audience. Sykes explains the principles of genetics and human evolution, the particularities of mitochondrial DNA, and analyses of ancient DNA to genetically link modern humans to prehistoric ancestors.
Following the developments of mitochondrial genetics, Sykes traces back human migrations, discusses the "out of Africa theory" and casts serious doubt upon Heyerdahl's theory of the Peruvian origin of the Polynesians, which opposed the theory of their origin in Indonesia. He also describes the use of mitochondrial DNA in identifying the remains of Emperor Nicholas II of Russia, and in assessing the genetic makeup of modern Europe.
The title of the book comes from one of the principal achievements of mitochondrial genetics, which is the classification of all modern Europeans into seven groups, the mitochondrial haplogroups. Each haplogroup is defined by a set of characteristic mutations on the mitochondrial genome, and can be traced along a person's maternal line to a specific prehistoric woman.

Saxons, Vikings, and Celts : The Genetic Roots of B …

Words and Rules: The Ingredients of Language

This Is Your Brain on Music