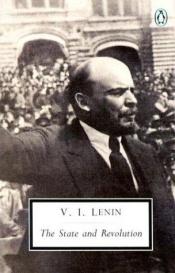 The State And Revolution

The State and Revolution, by Vladimir Lenin, describes the role of the State in society, the necessity of proletarian revolution, and the theoretic inadequacies of social democracy in achieving revolution to establish the dictatorship of the proletariat.
The State and Revolution is considered to be Lenin's most important work on the state and has been called by Lucio Colletti "Lenin's greatest contribution to political theory" According to the Marxologist David McLellan, "the book had its origin in Lenin's argument with Bukharin in the summer of 1916 over the existence of the state after a proletarian revolution. Bukharin had emphasised the 'withering' aspect, whereas Lenin insisted on the necessity of the state machinery to expropriate the expropriators. In fact, it was Lenin who changed his mind, and many of the ideas of State and Revolution, composed in the summer of 1917 - and particularly the anti-Statist theme - were those of Bukharin"
Lenin's direct and simple definition of the State is that "the State is a special organisation of force: it is an organisation of violence for the suppression of some class."

What Is to Be Done?

Ten Days That Shook the World

The ABC of anarchism

The Ideological Origins of the American Revolution