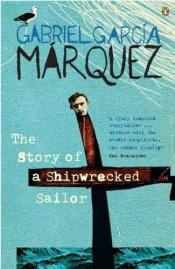 The Story of a Shipwrecked Sailor

The Story of a Shipwrecked Sailor is a work of non-fiction by Colombian writer Gabriel García Márquez. The full title is The Story of a Shipwrecked Sailor: Who Drifted on a Liferaft for Ten Days Without Food or Water, Was Proclaimed a National Hero, Kissed by Beauty Queens, Made Rich Through Publicity, and Then Spurned by the Government and Forgotten for All Time.
It was originally published as a fourteen consecutive day series of installments in El Espectador newspaper in 1955; it was later published as a book in 1970, and then translated into English by Randolph Hogan in 1986. The story is written in the first-person from the perspective of the sailor, 20-year-old Luis Alejandro Velasco, and was in fact signed by Velasco as author when it was first published in 1955. Not until 1970 when it was published as a book was García Márquez's name first publicly associated with the story.
Nobel laureate Gabriel García Márquez began his literary career as a newspaper writer.