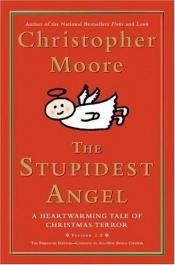 The Stupidest Angel: A Heartwarming Tale of Christmas Terror is the eighth novel by Christopher Moore. Set during Christmas, it brings together several favored characters from his previous books set in the fictional town of Pine Cove, a recurring location in Moore's novels.
An unabridged commercial compact disc recording of the original edition of The Stupidest Angel was issued with narration by Tony Roberts. In 2005 the novel won the Quill Award in the category of Science Fiction/Fantasy/Horror.
In 2005, Moore released The Stupidest Angel, Version 2.0, the text of which remains unchanged from that of the 2004 edition, with the addition of a short story at the end taking place one year after the events of the novel.

The Lust Lizard of Melancholy Cove

Fluke, or, I Know Why the Winged Whale Sings