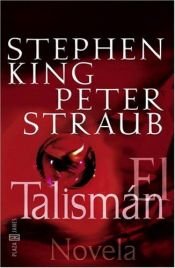 The Talisman is a 1984 fantasy novel by Stephen King and Peter Straub. The plot is not related to that of Walter Scott's 1825 novel of the same name, although there is one oblique reference to "a Sir Walter Scott novel". The Talisman was nominated for both the Locus and World Fantasy Awards in 1985. King and Straub followed up with a sequel, Black House, that picks up with a now-adult Jack as a retired Los Angeles homicide detective trying to solve a series of murders in the small town of French Landing, Wisconsin.
The book is dedicated to the authors' mothers: "This book is for Ruth King, Elvena Straub."