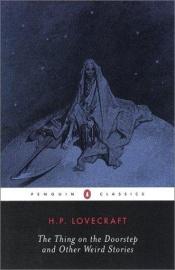 The Thing on the Doorstep and Other Weird Stories

The Thing on the Doorstep and Other Weird Stories is Penguin Classics' second omnibus edition of works by 20th-century American author H. P. Lovecraft. It was released in October 2001 and is still in print.
This edition is the second in Penguin Classics' series of paperback collections. Again, it collects a number of Lovecraft's most popular stories in their latest "definitive" editions as edited by S. T. Joshi. Many of the texts are the same as those from the earlier Arkham House hardcover editions, with the exception of At the Mountains of Madness, which has recently been released in a definitive edition by the Modern Library, with an introduction by China Miéville and also including Lovecraft's essay on the history and evolution of weird fiction, Supernatural Horror in Literature.
Its companion volumes from Penguin Classics are The Call of Cthulhu and Other Weird Stories, and The Dreams in the Witch House and Other Weird Stories.

The Horror in the Museum and Other Revisions

The Dunwich horror and others