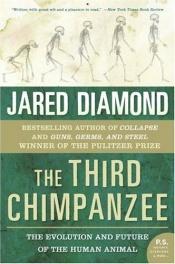 The Third Chimpanzee: The Evolution and Future of the Human Animal is a broad-focus book by academic and popular science author Jared Diamond, which explores concepts relating to the animal origins of human behavior, including cultural characteristics and those features often regarded as particularly unique to humans. It further explores the question of how Homo sapiens came to dominate its closest relatives, such as chimpanzees, and why one group of humans came to dominate others. In answering these questions, Diamond applies a variety of biological and anthropological arguments to reject traditional hegemonic views that the dominant peoples came from "superior" genetic stock and argues instead that those peoples who came to dominate others did so because of advantages found in their local environment which allowed them to develop larger populations, wider immunities to disease, and superior technologies for agriculture and warfare.
The Third Chimpanzee also examines how asymmetry in male and female mating behaviour is resolved through differing social structures across cultures, and how first contact between unequal civilizations almost always results in genocide.

The Seven Daughters of Eve: The Science That Reveal …

The time before history