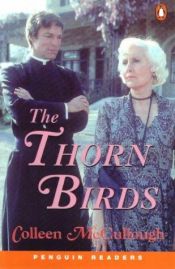 The Thorn Birds is a 1977 best-selling novel by Colleen McCullough, an Australian author. Set primarily on Drogheda—a fictional sheep station in the Australian Outback named after Drogheda, Ireland—the story focuses on the Cleary family and spans the years 1915 to 1969.
In 1983, the novel was adapted as a TV mini-series that, during its television run 27–30 March, became the United States' second highest rated mini-series of all time behind Roots. The mini-series starred Richard Chamberlain, Rachel Ward, Barbara Stanwyck, Christopher Plummer, Bryan Brown, Mare Winningham, Philip Anglim, and Jean Simmons. It was directed by Daryl Duke and produced by television veteran David L. Wolper.