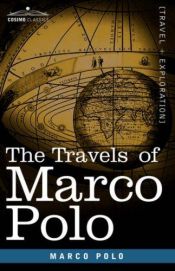 The Travels of Marco Polo

Book of the Marvels of the World or Description of the World, in Italian Il Milione or Oriente Poliano and in English commonly called The Travels of Marco Polo, is a 13th-century travelogue written down by Rustichello da Pisa from stories told by Marco Polo, describing Polo's travels through Asia, Persia, China, and Indonesia between 1276 and 1291, and his experiences at the court of Kublai Khan.
The book was written in Old French by romance writer Rustichello da Pisa, who worked from accounts which he had heard from Marco Polo when they were imprisoned together in Genoa. From the beginning, there has been incredulity over Polo's sometimes fabulous stories, as well as a scholarly debate in recent times. Some have questioned whether Marco had actually traveled to China or was just repeating stories that he had heard from other travelers.

What Am I Doing Here