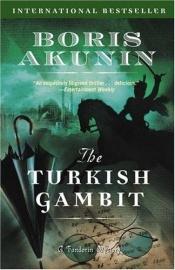 The Turkish Gambit is the second novel from the Erast Fandorin series of historical detective novels by Russian author Boris Akunin. It was published in Russia in 1998. The English translation by Andrew Bromfield was published in 2005 as third of Fandorin novels, after Murder on the Leviathan which follows it in the internal chronology.
The novel is subtitled шпионский детектив. It takes place in Bulgaria during the Russo-Turkish War with Fandorin investigating the doings of a Turkish agent thwarting Russian advance. Each of the 14 chapters plus an epilogue is headed by a quote from a fictional newspaper article, some written by the novel's characters.

Murder on the Leviathan

The Death of Achilles

The State Counsellor: The Further Adventures of Fan …

The Daughter of Time

The Full Cupboard of Life