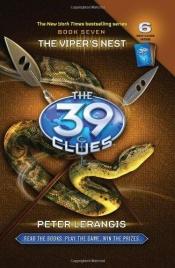 The Viper's Nest is the seventh book in The 39 Clues series. It was written by Peter Lerangis and was released by Scholastic on February 2, 2010. The 39 Clues series is intended for children aged 8–12, and takes the form of a multimedia adventure story spanning 10 books. The stories focus on a brother and sister, Amy and Dan Cahill, and their efforts to piece together clues left by the matriarch of the family, Grace Cahill, upon her death.
The Viper's Nest follows immediately on from the events of the preceding book: In Too Deep. The events are described, below, using in-universe tone. Shocked by the death of Irina Spasky, Dan and Amy venture into danger once again. For the first, they begin to question how much they trust their au pair, Nellie. Later in the book, she regains their trust.
The morse code dashes and dots, along the page margins in the middle of the book, reads: "There is a madrigal watcher".