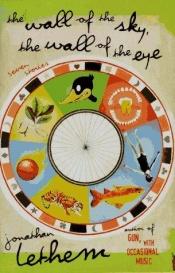 The Wall of the Sky, the Wall of the Eye is a 1996 collection of seven short stories by Jonathan Lethem. In 2002 a collection of the same name appeared in the UK that also contained seven stories, but two stories from the earlier collection—"Vanilla Dunk" and "Forever, Said the Duck"—were replaced by "Access Fantasy" and "How We Got Into Town And Out Again". All of the stories, as with much of Lethem's early work, have definite science fiction elements despite their widely varying content and some thinly veiled commentary on modern society.
The collection won a World Fantasy Award in 1997.

We Can Remember It for You Wholesale

S Is for Space

Approaching Oblivion Road Signs on the Treadmill To …