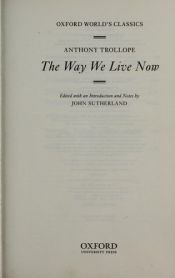 The Way We Live Now is a satirical novel by Anthony Trollope, published in London in 1875 after first appearing in serialised form. It is one of the last significant Victorian novels to have been published in monthly parts.
Comprising 100 chapters, The Way We Live Now was Trollope's longest novel, and is particularly rich in sub-plot. It was inspired by the financial scandals of the early 1870s; Trollope had just returned to England from abroad, and was appalled by the greed and dishonesty those scandals exposed. This novel was his rebuke. It dramatises how that greed and dishonesty pervaded the commercial, political, moral, and intellectual life of that era.

The Vicar of Wakefield