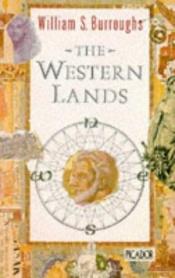 The Western Lands is a 1987 novel by William S. Burroughs, the final book of the trilogy that begins with Cities of the Red Night and continues with The Place of Dead Roads. The title refers to the western bank of the Nile River, which in Egyptian mythology is the Land of the Dead. Inspired by the Egyptian Book of the Dead, Burroughs explores the after-death state by means of dream scenarios, hallucinatory passages, talismanic magic, occultism, superstition, and his characteristic view of the nature of reality.
The prose is notable in that it shifts back and forth between Burroughs' characters and episodes clearly drawn from his own life. Scenes that are unmistakably auto-biographical include vignettes where Burroughs takes out evidence of amphetamine prescription bottles his mother gave him to sink with a large stone at the bottom of Lake Worth, Florida. The bottles were evidence his mother found in her grandson’s, Burroughs' own son's, bedroom. While Burroughs is ankle deep in the water, his aged mother is stalling police investigators in her home.

The Death and Life of Charlie St. Cloud

The Professor of Desire