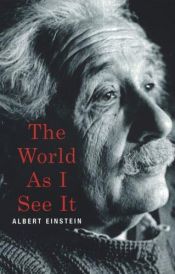 The World as I See It

The World as I See It is a book by Albert Einstein published in 1949. Composed of assorted articles, addresses, letters, interviews and pronouncements published before 1935, it includes Einstein's opinions on the meaning of life, ethics, science, society, religion, and politics.
According to the preface of the first edition,
Albert Einstein believes in humanity, in a peaceful world of mutual helpfulness, and in the high mission of science. This book is intended as a plea for this belief at a time which compels every one of us to overhaul his mental attitude and his ideas.

Relativity: The Special and the General Theory

The Evolution of Physics

The Flying Circus of Physics

The Meaning of Relativity