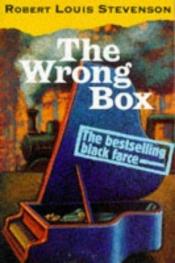 The Wrong Box is a black comedy novel co-written by Robert Louis Stevenson and Lloyd Osbourne, first published in 1889. The story is about two brothers who are the last two surviving members of a tontine.
The book was the first of three novels that Stevenson co-wrote with Osbourne, who was his stepson. The others were The Wrecker and The Ebb-Tide. Osbourne wrote the first draft of the novel late in 1887, Stevenson revised it in 1888 and again in 1889 when it was finally called The Wrong Box. A film adaptation, also titled The Wrong Box, was released in 1966, and a musical in 2002.

Blott on the Landscape

A Short History of a Small Place