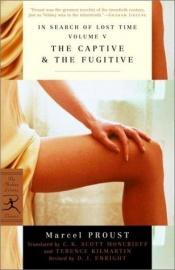 The Modern Library’s fifth volume of In Search of Lost Time contains both The Captive (1923) and The Fugitive (1925). In The Captive, Proust’s narrator describes living in his mother’s Paris apartment with his lover, Albertine, and subsequently falling out of love with her. In The Fugitive, the narrator loses Albertine forever. Rich with irony, The Captive and The Fugitive inspire meditations on desire, sexual love, music, and the art of introspection.

The Way of All Flesh