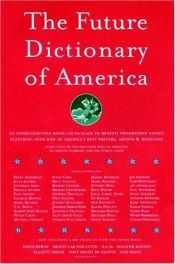 The future dictionary of America : a book to benefit progressive causes in the 2004 elections featuring over 170 of America's best writers and artists

This book was conceived by Safran Foer Foer, Nicole Krauss, and Dave Eggers as a way to bring over a hundred authors together to promote progressive causes in the November 2004 election. The book is an imagining of what a dictionary might look like about thirty years hence, when all of the world's problems are solved and our current president is a distant memory. The book is by turns funny, outraged, utopian, and dyspeptic.

Hardcover editions of the book will also include a CD compilation, with all new songs by the best musicians working. Among them: David Byrne, R.E.M., Death Cab for Cutie, Moby, Sleater-Kinney, Flaming Lips, Tom Waits, Yo La Tengo, Bright Eyes, They Might Be Giants, Elliott Smith, and the Yeah Yeah Yeahs.

The Praise of Folly

The Wave in the Mind: Talks and Essays on the Write …