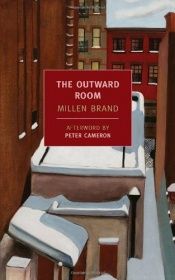 The Outward Room is a book about a young woman’s journey from madness to self-discovery. It created a sensation when it was first published in 1937, and has lost none of its immediacy or its power to move the reader.

Having suffered a nervous breakdown after her brother’s death in a car accident, Harriet Demuth is committed to a mental hospital, but her doctor’s Freudian nostrums do little to make her well. Convinced that she and she alone can refashion her life, Harriet makes a daring escape from the hospital—hopping a train by night and riding the rails into the vastness of New York City in the light of the rising sun. It is the middle of the Great Depression, and at first Harriet is lost among the city’s anonymous multitudes. She pawns her jewelry and lives an increasingly hand-to-mouth existence until she meets John, a machine-shop worker. Slowly Harriet begins to recover her sense of self; slowly she and John begin to fall in love. The story of that emerging love, told with the lyricism of Virginia Woolf and the realism of Theodore Dreiser, is the heart of Millen Brand’s remarkable book.

An Object of Beauty

The Unknown Masterpiece (and Gambara)