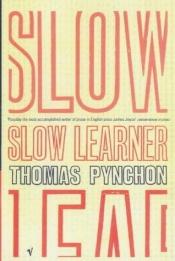 Slow Learner is the 1984 published collection of six early short stories by the American novelist Thomas Pynchon, originally published in various sources between 1959 and 1964.
The book is also notable for its introduction, written by Pynchon. His comments on the stories after reading them again for the first time in many years, and his recollection of the events surrounding their creation, amount to the author's only autobiographical comments to his readers.

The Wonderful Story of Henry Sugar and Six More