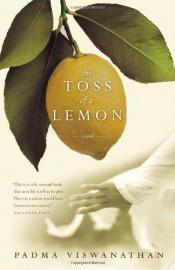 The toss of a lemon

The year of the marriage proposal, Sivakami is ten. She is neither tall nor short for her age, but she will not grow much more. Her shoulders are narrow but appear solid, as though the blades are fused to protect her heart from the back. She carries herself with an attractive stiffness: her shoulders straight and always aligned. She looks capable of bearing great burdens, not as though born to yoke but perhaps as though born with a yoke within her.

Spanning the lifetime of one woman (1896–1962), The Toss of a Lemon brings us intimately into a Brahmin household, into an India we’ve never before seen.

Married at ten, widowed at eighteen, left with two children, Sivakami must wear widow’s whites, shave her head, and touch no one from dawn to dusk. She is not allowed to remarry, and in the next sixty years she ventures outside her family compound only three times. She is extremely orthodox in her behavior except for one defiant act: She moves back to her dead husband’s house and village to raise her children. That decision sets the course of her children’s and grandchildren’s lives, twisting their fates in surprising, sometimes heartbreaking ways. Inspired by her grandmother's stories, Padma Viswanathan masterfully brings to life a profoundly exotic yet utterly recognizable family in the midst of social and political upheaval. The Toss of a Lemon is the debut of a major new writer.

The Enchantress of Florence

The Clan of the Cave Bear