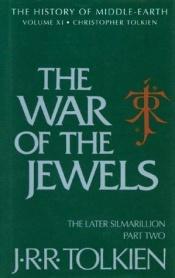 The war of the jewels : the later Silmarillion, part two, the legends of Beleriand (history of Middle-earth, Vol. 11)

The War of the Jewels is the 11th volume of Christopher Tolkien's series The History of Middle-earth, analysing the unpublished manuscripts of his father J. R. R. Tolkien.
It is the second of two volumes — Morgoth's Ring being the first — to explore the later 1951 Silmarillion drafts.
This volume includes:
The second part of the 1951 Silmarillion drafts
An expanded account of the "Grey Annals", the history of Beleriand after the coming of the Elves.
Additional narratives involving Húrin and the tragedy of his children. "The Wanderings of Húrin" is the conclusion to the Narn. It was not included in the final Silmarillion because Christopher Tolkien feared that the heavy compression which would have been necessary to make it a stylistic match with the rest of the book would have been too difficult and would have made the story overly complex and difficult to read.
Christopher Tolkien's explanation of how he, with the collaboration of future fantasy author Guy Gavriel Kay, constructed Chapter 22 of the Quenta Silmarillion, since none of his father's accounts of this episode were recent enough to fit the narrative in its final form.

The Treason of Isengard

The Great and Secret Show

The Hollowing: A Novel Of The Mythago Cycle