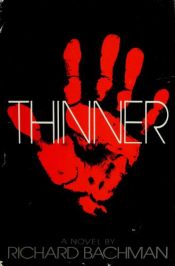 Thinner is a 1984 novel by Stephen King, published under his pseudonym, Richard Bachman. It is about a man cursed by a gypsy to grow progressively thinner. It would be the last novel which King released under the Richard Bachman pseudonym until the release of The Regulators in 1996, and the last released prior to Bachman being outed as being Stephen King's pseudonym.
The initial hardcover release of Thinner included a fake jacket photo of "Bachman". The photo is claimed to have been taken by Claudia Inez Bachman. The actual subject of the photo is Richard Manuel, the insurance agent of Kirby McCauley, who was King's literary agent.
The novel was adapted for the screenplay of a 1996 film of the same title.