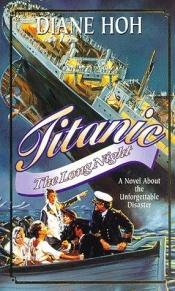 Titanic: The Long Night is a 1998 romance novel by Diane Hoh. It is an entirely fictional story set aboard on the real ship, Titanic.
The plot centers around two main aspects. The first is the story of Elizabeth Farr, who is on the Titanic with her parents on the voyage to New York City, on her way to marry a man she doesn't want to marry, Alan Reed. While on the ship, she has frequent discussions with her parents about wanting to go to college and not wanting to marry Alan, but they refuse to let her make her own decisions. While on ship, she meets Maxwell Whittaker, the son of the rich Whittaker family, and falls in love with him, against the will of her parents.
The plot also deals with the story of Kathleen Hanrahan, a girl who boards in Queenstown, Ireland. She falls in love with a man named Patrick "Paddy" Kelleher. She is also forced to take care of two small kids, Kevin and Bridey, whose caretaker is not paying attention to them.
On the night the Titanic crashes into the iceberg, Elizabeth forgets all of her troubles when she realizes that she has to leave Max and her father behind on the ship while it sinks. She gets in Lifeboat Number 6 with her mother, Nola.

Tangled Up In You

Every little thing about you

Once upon a summer

When calls the heart