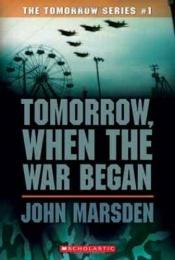 World War III becomes an unstoppable reality in the action-packed first installment of the Tomorrow series--an international bestseller in an eye-catching new paperback.

When Ellie and her friends go camping, they have no idea they're leaving their old lives behind forever. Despite a less-than-tragic food shortage and a secret crush or two, everything goes as planned. But a week later, they return home to find their houses empty and their pets starving. Something has gone wrong--horribly wrong. Before long, they realize the country has been invaded, and the entire town has been captured--including their families and all their friends.
Ellie and the other survivors face an impossible decision: They can flee for the mountains or surrender. Or they can fight.

Best book ever for a 15\16 year old. Exciting and complex characters add up to a great action backgroud. Perfect.

The Dead of the Night

The Third Day, the Frost